Bobby Tyson is a very humble and laid back guy who just happens to wind the best sounding vintage-style humbucking pickups on the planet. We can say this because we have had more than a few authentic Gibson PAFs and many reproduction humbuckers in our possession and Tyson absolutely nails the tone, feel, dynamic response and harmonic complexity of a great PAF pickup (and they weren’t all great). Listen, and Enjoy…

I have always tweaked my own gear to get it to sound better. I bought this used humbucking pickup on eBay and somebody had installed a four conductor lead, and it sounded kind of dark so I took the cover off of it to brighten it up a little bit. 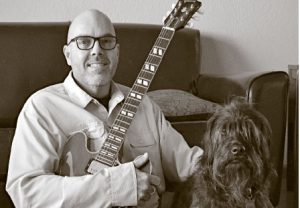 Whoever put the lead on it didn’t tape it and some of the coil wire ended up tearing. I reached out to a pickup maker that was kind enough to walk me through how to repair it. I thought well if I can do that, maybe I can make pickups. So I started studying pickup winding machines and a whole bunch of information, filling up notebooks. I bought a pickup winding machine and I’m a P90 guy so I began winding P90s and that’s all I made for a couple of years. I sold those exclusively, and it just kind of worked out. I don’t like using any effects pedals or master volume amplifiers. I prefer to just use the controls on my guitar to get a tone. That’s what I like in old guitars… you strum a chord or pick a note and it just does something.

I’m very fortunate to have some friends that have some really nice old gear that they let me borrow some of the best of the best. A friend loaned me a great 1960 ES-345, and about six PAF pickups that are just exceptional and a couple that I really like. I just make stuff that I like and I use measurements to be able to replicate it. I have four old mechanical auto traverse coil winding machines, one of which was owned by the Lionel train company. They were all built to wind fine wire – the same gauges as guitar pickups.

TQR:
Was Lionel using it to wind transformers?

Yes, I believe so and other parts. All my machines are similar and have interchangeable parts. If something breaks I can go to a machine shop and have a part made. They are all very, very controllable.

TQR:
How important is the winding machine to the sound of the pickup? 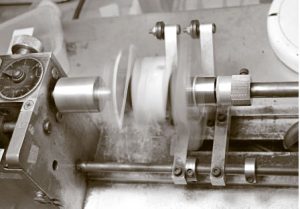 That being said, I can take a sewing machine motor and rubber bands and make something that will sound the same as a pickup wound on one of my machines. The big plus for me having these auto-traverse machines is repeatability. Also, if you unwind one of the coils that is wound on these old auto-traverse machines, it doesn’t look like it is machine wound. There are areas where it is kind of bunched up. But the good thing about them is you can wind a coil that is identical every single time.

TQR:
Do you purposefully scatterwind?

Well, no, like my humbuckers are pretty much dead nuts on with the ’50s PAFS. If you look at one of those and one of mine they are going to look pretty much identical. They may look like they are scatterwound because when you change direction in the traverse the coil, the wire can kind of bunch up there.

TQR:
But you are going for a more or less uniform winding pattern.

Yes. Every machine has its own pattern. It’s all serendipity – all the little details added together. Like a great set up on a guitar. A good guitar becomes great, and that’s not based on a magic bridge or tailpiece. It’s everything acting as a system. A pickup is part of a system and I encourage people to talk to me  about what they want.

There are two voicings with a lower and a higher output version of each, not that either of them are particularly high or low.

TQR:
Well where does the Deacon that we have sit in all of this?

That’s slightly lower output and the one that Peter Stroud has is just a hair over that. On yours the neck should be about 7.4K and the bridge 7.8K.

TQR:
I communicated with Peter, and he and I agreed that your pickups are the best sounding PAF “replica” pickups we have ever heard. They easily rival a great set of authentic ’59 Gibson humbuckers.

That’s great to hear. My pickups are actually copies of a set that you had and reviewed several years ago when you did reviews of multiple sets of vintage Gibson PAFs.

TQR:
Yeah, Kim LaFleur at vintageheckout.wordpress.com loaned us some PAFs. He sent us perhaps a dozen sets of vintage PAFs and we installed them in a great Historic Les Paul, listened to them and wrote a review article ranking them all.

Well, this one set just sounded amazing. My friend who has maybe thirty or forty guitars had this one Les Paul that was really kind of unspectacular and we put those pickups in the guitar and it suddenly just sounded incredibly good. My friend loaned me those pickups and I worked on replicating them for quite some time. They had covers on them and so I didn’t touch a thing on them, they sounded so good.

TQR:
Take us through the process. How did you go about winding pickups that sounded like that vintage set?

It was a little bit of everything and I would only change one thing at a time. I would wind maybe eight different coils and stick them in the pickup and play them through a guitar. I would do the same thing with magnets, pole screws, and all that stuff. It was a long, drawn out process but that was the way to do it. You just have to learn what works and what doesn’t.

TQR:
What kinds of magnets were you using?

Alnico 2 in the bridge pickup and Alnico 4 in the neck. The way I make them I have found that an Alnico 4 sounds right in just about any guitar. With the Alnico 2 it’s pretty much the same thing. It just works really well for what I do. I use 42 gauge plain enamel wire and I get a bunch of it at the same time. There isn’t a tremendous amount of variance but there is some, and that’s important too.

TQR:
And then as far as the number of turns you are just staying with the original PAF spec?

Well, I am fortunate and grateful for the level of success that I’ve had. Amazing artists, that are also awfully nice people that could use whatever they want are playing them. It’s pretty cool. My main design focus has always been on dynamic range. Not just feel/touch sensitivity but sonically as well. I do my best to make pickups that really respond to the touch of the player, sound different when the signal chain changes, guitars but always retaining clarity, note definition and separation. That’s what I found and loved most in some original PAFs.

Well, we have already said all you need to know… the Tyson Tone pickups equal the sound of the very best Gibson PAFs, and we know this because we have had the very best Gibson PAFs right here, as reviewed in TQR years ago. We won’t confess to knowing much, but we do know what a great vintage Gibson humbucker sounds like. Yes, we do. You just have to decide whether you want the slightly lower resistance pickups we were sent, or the slightly higher set Peter Stroud received. Frankly, we don’t see how you could be disappointed with either, and we’ll say this –  our “low wind” set lacks nothing in output and attitude. They are simply smooth, strong, richly endowed with tone from top to bottom and overflowing with the kind of rich harmonic overtones that make a truly great pickup great, leaving you all that much better in your effort to honor your guitar heroes living and buried. It’s your move, and we suggest you get on it before Mr. Tyson gets too busy. It’s bound to happen. It always does. There are just too many tone hounds out there and it won’t be long before they will all be barking at Bobby Tyson’s door.
Quest forth… TQ